OK – I stayed quiet when ABC fired Regis Philbin because they no longer wanted to pay his salary and when they cancelled All My Children in favor of a cheaper-to-produce talk show but I can hold my tongue no more…  Jimmy Fallon taking over The Tonight Show…  WTF?!

Don’t get me wrong - I think Jimmy Fallon is one of the most talented Saturday Night Live alums ever.  (Here’s his amazing SNL audition – http://www.youtube.com/watch?v=u1aKiolG2CA).  Brilliant impressionist, musician, and just plain adorable.  The Barry Gibb Talk Show is on my list of the top five funniest sketches in SNL history.  I even enjoyed his films Taxi and Fever Pitch.  I enjoyed them so much that I’ve been wondering for five years why he’s been wasting his immense talent on a late night talk show (besides the consistent network money).  He could easily have a landmark comedy career like Robin Williams or Jim Carrey.  In my opinion, Fallon is too goofy as a host and has no real hosting talent.  Just laughs and gushes a lot.  He truly idolizes most of the people he’s interviewing, which is endearing, but not that interesting.  As I said already – he’s very cute and talented so Late Night with Jimmy Fallon is a hit.  But The Tonight Show is a whole other ballgame and I don’t think Late Night’s childish 12:35am antics will translate. 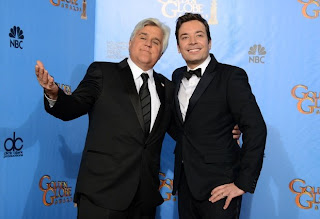 From an image perspective, it seems all that matters on TV is youth and the bottom line, and this is sad.  What about tradition?  The Tonight Show has been an American institution since 1957.  There was Jack Paar, then the beloved Johnny Carson and because Jay Leno is popular with an older demographic as well as the middle of the country, he has succeeded in keeping it the number one late night show for 22 years.  So - why is NBC firing him?  They’ve done it before and it was a disaster.  Why do they think they can do it again?  And since The Tonight Show is number one, why do they want to get rid of Jay?  The only feasible answer is that they don’t want to pay him anymore.  And I think this is a travesty.

Nothing about this story makes sense.  First, Fallon’s going to host The Tonight Show.  Second, they are moving the show to New York and last, Lorne Michaels is going to be Executive Producer.  The majority of Hollywood actors live in LA.  How will they get guests?  Fallon’s young – if he really wants the gig, he should move to LA.  Conan did.  And why does Lorne have to exec produce EVERY SNL alum TV project?  It’s been 38 years - give someone else a shot, Lorne!

If NBC really wants to save money, why not just cancel The Tonight Show?  It’s had a great run of over 50 years.  Sometimes it’s about ending something gracefully instead of stripping it of everything that made it great in the first place, just to try to make a buck.

Maybe the American viewing audience will revolt like they did with the Conan debacle of 2009.  I’m taking the time & energy to write this and I don’t even like Jay Leno.  I can only imagine what people who watch him every night feel like.  The saving grace for me in all of this is that I am Team Letterman all the way and right now CBS is the number one network.

Posted by Antonia Russo at 9:36 AM