Recently I have seen Mel Brooks and Carl Reiner in interviews talking about how they spend every evening together and I think it’s very sweet.  Mel goes to Carl’s house around 8:00 and they eat dinner and watch Jeopardy and any movie where one character says, “Secure the perimeter!” and another says “You should get some rest…”

I saw these two comedy legends on Jerry Seinfeld’s great web series Comedians in Cars Getting Coffee and wondered where Carl’s wife was.  I knew that Anne Bancroft – one of my favorite actresses of all time - died way too soon in 2005 at age 73 but I didn’t remember that Estelle Reiner had also passed at age 94 in 2008.  Estelle was a jazz singer and not really an actress, but that didn’t stop her from delivering one of the most famous lines in film history, “I’ll have what she’s having” in When Harry Met Sally. The Reiners were married for 65 years, until her death.

Anne Bancroft & Mel Brooks were married for 40 years and I always got the impression that they had a lot of fun together.  On her IMDB page, Bancroft is quoted with saying this about Mel:  “When he comes home at night and I hear his key in the lock I say to myself, Oh good!  The party's about to begin.”  They didn’t work together often (only the remake of To Be or Not To Be I believe) but it was Anne’s idea to turn The Producers into a Broadway musical and what great idea that was.

People talk trash all the time about how Hollywood marriages never survive and I love when someone beats the odds in Hollywood.  Brooks & Reiner are two great examples of shattering that image.  They have both had exceptional careers and great loves as well.

Carl & Mel met in 1950, so they’ve been friends longer than most marriages and almost as long as Carl & Estelle’s.  My mother was diagnosed with dementia a few weeks ago and it’s made me wonder about the future.  We never know what’s going to happen.  Life is a mystery and so uncertain.  But no matter what – it’s nice to know you have a best friend to share your evenings with. 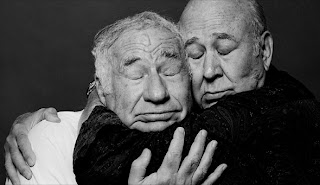 Posted by Antonia Russo at 4:20 PM