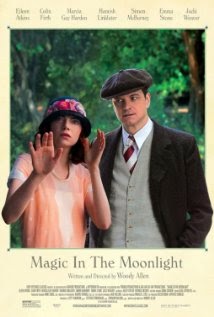 As a self-proclaimed Woody-phile, I look forward to a new Woody Allen film every summer. (And since he’s 78 ½ who knows how many more he will make? Although he is shooting the next one right now)...  Naysayers like to lament about the golden age of Woody, completely discounting anything he’s had to offer since the ‘80s. I strongly disagree. In fact, I assert that Magic in the Moonlight, opening today, is one of the most intelligent and articulate scripts the Wood-man has ever written.

The main character is the typical Woody-esque curmudgeon but the dialogue is so infused with British aristocratic jargon that it sounds much more elegant than usual AND it is still funny as hell. The film is also a beautiful period piece, with more color and elaborate costumes than Woody used to use in his early Upper East Side stories. The thing that I love the most is that Woody is still asking questions about faith and magic in the universe versus knowledge and science.

The entire company is led brilliantly by Colin Firth. His performance is pitch-perfect and he must be acknowledged for being Woody’s leading man without doing a Woody Allen impersonation. Bravo Mr. Firth! It is another engaging character I have seen Firth do in an always fantastic career.

It will be interesting to see if this film gets the acclaim that Blue Jasmine did. It seems like a good formula: Woody plus seasoned lead actor from another country = greatness and acclaim. We shall see…
Posted by Antonia Russo at 7:25 AM No comments:

When Philip Seymour Hoffman died last February, Entertainment Weekly uncharacteristically published their next issue with a full page photo of PSH on the cover with the caption: Brilliant. Troubled. Tragic., and the article inside began with "This one hurts."  Out of all that was written about Hoffman that week, EW came closest to commiserating with my grief.  After 5 months I still find Hoffman’s death inconceivable and extraordinarily tragic.  It still hurts a lot.  It's difficult to write about the final film he completed, but I also feel like I need to. This may be the last opportunity I have to write about the greatest actor of the past 25 years …  I had to honor his extraordinary talent once again, as I did in February.

A Most Wanted Man is a suspenseful thriller about a manhunt for an immigrant who may be a terrorist in the port city of Hamburg, Germany.  This is not a genre that I normally seek out, but I made an exception because it is PSH's final film to be released (I am NOT counting The Hunger Games) and it is very well done.  It has a great international supporting cast, including relative unknown Grigoriy Dobrygin and German stars Nina Hoss and Daniel Bruhl.  I was most impressed with Rachel McAdams, who plays a German bleeding heart lawyer surprisingly well and holds her own with the likes of Willem Dafoe and PSH.

Although I believe Phil could play anything, this was still a departure for him in terms of tone and character.  The film is extremely tense and his character is a troubled German spy who is trying to do good work in the face of many personal and professional demons.  I don't intend to spoil anything and I am not a film critic, so I will be brief.  There are a few scenes where PSH displays incredible proficience in the art of subtle but profound acting.  I will now defer to Phil, his fellow actors and the director to speak for the film.
One more thing - director Anton Corbijn and PSH had plans to work together again and Mr. Corbijn wrote a beautiful tribute in his grief on February 3.  My favorite part is, “His strength was a total immersion in the role and a lack of vanity.”

A fitting epitaph for a remarkable actor.
Posted by Antonia Russo at 7:51 AM No comments: