Today is a huge day for Joseph Gordon-Levitt.  Don Jon - the first film that he has written and directed, is finally opening.  Don Jon got a ton of acclaim on the festival circuit and its opening today is so big, IMDb dedicated their entire homepage to all things JGL.

Joseph Gordon-Levitt started acting at the age of 6 and has had a great deal of success on the traditional Hollywood route.  Now, he’s using that mainstream cred to make his own films and while he’s at it, change the way films & TV are being made.  His website www.hitrecord.org is an “open collaborative production company.”  Artists can upload their work and contribute to diverse film projects – and get paid.  What a concept!  The newest hitRECord project is its most ambitious yet - a variety show for the brand new Pivot network.

I have been a JGL admirer for years – even when he was only doing small roles & tiny indies.  500 Days of Summer is what changed everything for Joe (as his friends call him).  He was finally a leading man in a not so tiny indie and he nailed the gamut of emotions in his doomed relationship with Zooey Deschanel.  In the past few years, I’ve felt like a proud mama (even though I’m not that much older than him) because of Joe’s big time success & exposure in movies like Inception, Lincoln & The Dark Night Rises.
JGL is empirically talented but what’s more fascinating is that he’s redefining cool.  He is very stylish and always smiling and his positive energy makes you want to root for him, hang out with him – or maybe even hire him.  Joe just seems like the nicest guy.  Like Jimmy Stewart, he is private and he has never been part of any scandal.  Instead of resting on his laurels, he is helping other artists do their thing and get compensated.  He is at the top of his game so he’s decided to change the game and just see what happens.

For pure unadulterated entertainment (and evidence of JGL’s insane talent), check out his lip synch battle with Stephen Merchant on Late Night with Jimmy Fallon
http://www.youtube.com/watch?v=R4ajQ-foj2Q

I need to propose a question that has plagued me for a long time: Why isn’t Jake Gyllenhaal a huge movie star right now?  He was heartbreakingly brilliant in Brokeback Mountain and nominated for a Best Supporting Actor Oscar.  Since then though, his career has not evolved very much.  He has only made a handful of movies in eight years and a few have gotten critical notice, but nothing has come even close to Brokeback.

So, what is it?  Does Jake have bad management?  Born into a show business family, he should have the inside track to mega-stardom.  He is young, gorgeous and talented, so what’s missing?  Why isn’t he a movie star on the level of Clooney, Damon & Pitt?

After Brokeback, what happened?  (I mean Prince of Persia?  Really?  I couldn’t even sit through the trailer for that one).  Last year Jake also did an Off-Broadway show, which boggled my mind.

What I’m saying is I want to see much more of Jake Gyllenhaal (literally & figuratively!).  From what I have seen, he is much more than a pretty face and he has not shied away from diverse roles.  Early in his career, he helmed October Sky as a budding rocket scientist and will always be recognized for the cult favorite Donnie Darko.  He was both creepy and adorable in The Good Girl and compelling in the surprisingly impactful Love & Other Drugs, which earned him a Golden Globe nomination.

Whatever the missing link - maybe things will change after this this weekend.  Gyllenhaal stars in the eagerly anticipated thriller Prisoners, opening today.  Will this much promoted film with an all star cast (including Hugh Jackman) put Jake back on the A-List where he belongs?  Let’s hope so because I cannot quit him. 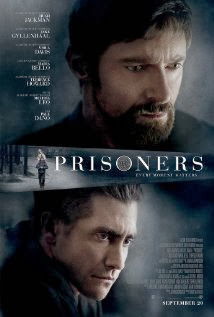