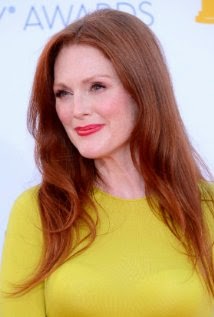 For months I have been saying that Julianne Moore will win the Oscar for Best Actress for the movie Still Alice, opening today.  I finally saw the film this week at an advanced screening and I am indeed correct.  I have never been so certain of a win by an actor for a relatively unknown film.

It is a tiny little indie made in a month and it is amazing that it got made at all.  The universe aligned for it to happen in a short time.  It was financed by a small group of mostly women investors, including Maria Shriver & Trudie Styler; and the studio gave Julianne a month off from Mockingjay, which is usually unheard of in big budget land.  The other remarkable fact is that one of the directors has ALS and now has very limited mobility from the waist up and no access to speech.  So, the director couple (Richard Glatzer & Wash Westmoreland) were experiencing a similar degeneration while making a film about a woman losing her memory.  It is no wonder that the film feels so empathetic.

In addition to Still Alice being a wonderful film – here are all the other reasons why Julianne Moore is going to win the Academy Award this year: 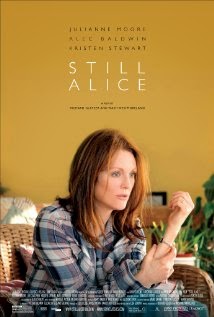 1 – She is due.  She has done consistently great work for 20 years and has been nominated four times already for both Best Actress & Best Supporting Actress.

2 – There is not a lot of female competition this year.  As I said previously, it’s all about the boys.  Moore's closest contender is Felicity Jones in The Theory of Everything but I don’t think Jones is popular enough yet to be a real threat.

3 – The film is about early onset Alzheimer’s, a devastating subject and as usual, Moore does a great job in the title role.

4 – She’s an actor’s actor. Everyone in the business loves her and that’s who votes for Oscars.

For many years, I took Julianne Moore for granted.  I loved everything about Boogie Nights and then simply assumed she’d be excellent whenever I saw her show up in a movie.  She was so dependable that I didn’t really take notice of her.  But in the last few years she has grown on me and absolutely knocked me out in A Single Man.  I finally woke up to her talent and the world will next month as well when they say, “And the Oscar goes to… Julianne Moore.”

Wish I Was Here


The Fault in Our Stars is my favorite movie of the year because it was the most satisfying film going experience I had all year.  Fault is wonderful all around - one of the best written films EVER and the performances are simply stunning.  Shailene Woodley is rapidly becoming a seriously great actress and Ansel Elgort seemed to come out of nowhere this year to be both radiantly charismatic & heartbreakingly vulnerable in this film.  It is a beautiful story of first love which was made for 12 million dollars and has already grossed ten times that.  It is proof that real stories about real people, when done well, can perform at the box office.

Birdman is definitely the best picture of the year because there is nothing else like it.  It is a technical marvel.  It deserves Best Picture and Best Director and every technical award it can get.  All the performances are great as well – especially Michael Keaton and Edward Norton.  I love Michael Keaton and would love to see him win an Oscar, but this year Redmayne edges Keaton out.

I wrote a whole blogpost about how remarkable Eddie Redmayne is in The Theory of Everything and how he SHOULD win Best Actor. He simply is THE best actor this year.

Whiplash is the most aptly named film of the year.  It is one of the most distinctive, exciting and unpredictable films I have ever seen.  Everything about it is electrifying, including JK Simmons, who deserves every award for Best Supporting Actor.

Obvious Child is bold, honest & hilarious and I want Jenny Slate to win Best Actress at the Independent Spirit Awards because she is wonderfully dimensional and this is the epitome of a great, low budget, female helmed indie.

The Imitation Game is a gorgeous, very British, tragic period piece and Benedict Cumberbatch does an impressive job in the lead.  Keira Knightley also matured as an actress in her role.  Amazing to me is the fact that Mark Strong is not getting any acknowledgment for his supporting performance.

Pride is the little indie that could.  It’s great.  A true story of the unlikely alliance of an LGBT club and a group of miners.  Wonderful ensemble led by breakout Ben Schnetzer and including Paddy Considine, Bill Nighy, Dominic West and the always superb and underrated Imelda Staunton.  Just see it.

I wrote a blogpost about how special Magic in the Moonlight is.  The best part is the extraordinary script and how Colin Firth commands attention every moment he is on screen.

The Skeleton Twins is another great indie – a dramedy about survival and the resilient connection between siblings.  It was great to see Bill Hader take on more serious material and the whole film, whether it makes you laugh or cry, is emotionally impactful.

And – after all the hoopla about Zach Braff raising money on Kickstarter, Wish I Was Here is an exceptionally funny and sweet movie about the definition of family and finally growing up in your 30s.

2014 was another great year for films big and small – but mostly small.