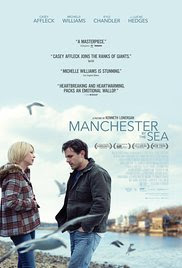 I’ve said this before and it needs to be said again. Katharine Hepburn won 4 Academy Awards (which is a solitary record) and she never attended a ceremony or campaigned in any way. And they weren’t all in the early part of her career. Kate won her 4th Oscar in 1981. I HATE that The Oscars have become both a popularity contest and an annual exercise in “Who do we owe this year?” Here’s my soapbox about both the great and the overrated this year.

1 – Manchester by the Sea is a masterpiece. Kenneth Lonergan dramatizes and beautifully directs the subject of extreme grief with humor, humanity and an incredible use of eclectic music. Lonergan’s original script needs to win the Oscar for screenplay because there is nothing else like it. And here’s the blatant truth: Casey Affleck has been in the trenches in mostly supporting roles for 20+ years. His leading performance as a tortured man in Manchester is restrained and beautiful and the bottom line is… It is Casey Affleck’s year. I don’t care what has unearthed from his personal life during this awards season. He is THE Best Actor of 2016. Period.

2 – La La Land is also a modern masterpiece because Damien Chazelle achieved making a romantic musical in 2017 that is visually stunning and (spoiler alert) does not have a happy ending! The actors (Emma Stone & the great Ryan Gosling) are honest & vulnerable and it takes guts to sing on screen with naturalistic singing voices. The film deserves a lot of acclaim for being unique, ambitious & absorbing. I’ve seen it twice and it was better the second time.

3 – Now for the bitching:
Fences is a play on film, not a movie. Denzel Washington & Viola Davis did it on Broadway in 2010 and both won Tonys so I don’t see why it needed to be made into a film – except maybe vanity. The film is very dramatic but not at all cinematic. Denzel the Great as Director does nothing interesting with his film adaptation. His acting is interesting but not compelling because there is not enough editing. Denzel already has 2 Oscars (#2 owed to him). He does not need a 3rd for this movie. I LOVE and greatly respect Viola Davis but I feel like the Oscars (and all the major awards this year) are making up for the incredible injustice of NOT giving her the award for Best Actress for The Help in 2011. I would give the award for Best Supporting Actress this year to either to Michelle Williams in Manchester or Naomie Harris in Moonlight.

Arrival is one of the worst movies I have EVER seen. Unbearably slow, boring, nonsensical and badly written. I don’t understand ANY of the acclaim for it.

And I know this is not going to be a popular comment – but – both Loving & Moonlight are so slow I stopped caring what happened on screen. The stories are significant but the filmmaking is so tedious that I cannot appreciate the finished product. I can acknowledge certain performances though – and I think Joel Edgerton was brilliant as usual, as were Mahershala Ali and Naomie Harris.

The entire cast of Denial. Tom Wilkinson, Rachel Weisz, Timothy Spall & Andrew Scott. All brilliant, as is the film.

Hugh Grant in Florence Foster Jenkins. I would give him every Supporting Actor Award for graciously holding his own opposite Dame Meryl Streep. And if not Hugh, runner up is the gorgeous & vulnerable breakout performance by Lucas Hedges in Manchester. Although another flagrant oversight is the remarkable 5 year old non-actor Sonny Pawar, who carries the first hour of Lion with ease.

Shafted for TWO great performances was Janelle Monae. Wonderful in Moonlight and scene stealing in Hidden Figures. It's shocking that she didn't get a nomination for Supporting Actress.

The Meddler is arguably Susan Sarandon’s greatest role ever and the film got NO recognition. It’s wonderfully written & poignant. Susan & the movie are just brilliant. See it.

And lastly - one awesome thing:
Because I am watching the Indie Spirit Awards right now, I have to say that I LOVE that Molly Shannon won for Best Supporting Actress for the very affecting Other People. Justice for a tiny little indie and an actress who can do both comedy and drama.

Posted by Antonia Russo at 9:21 AM No comments: