I have a theory that if a male actor in Hollywood is too good looking, he doesn’t get taken seriously. Examples of this are Colin Farrell (brilliant in Saving Mr. Banks) and Hugh Jackman (brilliant in EVERYTHING!). Most esteemed male actors are not empirically attractive and if they are, they get put into the category of Movie Star (Cary Grant, George Clooney, Brad Pitt and Matt Damon). Paul Newman was an exception to this rule, but it was different time.

In the most non-offensive double standard ever – it is a very different story with actresses. They can be simultaneously beautiful and taken seriously. But even so - in many cases actresses do even better when they make themselves ugly for a role (eg. Charlize Theron, Nicole Kidman and Halle Berry). 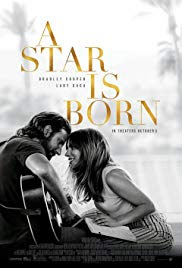 Bradley Cooper has been nominated
for an acting Oscar 5 times and has not won yet. He has disclosed that when he started out, many casting agents wrote him off as a “pretty boy” and he was not taken seriously as a dramatic actor. After 20 years of acting in TV & film, Cooper decided to take control of his destiny and helm a major project. He wanted something daunting to transform his perception in Hollywood and took the biggest risk of his life in choosing A Star is Born as his directorial debut. Everyone Bradley knows advised him not to do it but there was something inside him that compelled him to remake this classic Hollywood tale for the 4th time. On The Treatment with Elvis Mitchell he said, “I always wanted to tell a very intimate relatable story about love & addiction, and I wanted it to be cinematic.”

Cooper spent 4 years of his life and put all of himself (quite literally) into re-creating A Star is Born in 2018. He could have played it safe and just simply directed actors, but he chose to co-write the script, co-star in the film (including altering the timbre of his voice which took many months), learn guitar and co-write the music for the film. I was impressed with the beauty of the film because it feels like an old-fashioned love story in many ways. And Bradley can passionately talk about every single frame of this film, so it is truly his work of art.

It is always inspiring to witness someone follow their gut against the odds and have it pay off. Despite some mixed reviews, A Star is Born is a hit. It is one of the most nominated films of the year and it has also changed Lady Gaga’s life. Cooper could have opted for a safe choice for his leading lady, but he took a chance on Gaga and even if she doesn’t win the Oscar this year, ASIB has made her a movie star. There must be some real magic behind Cooper’s piercing blue eyes because even veteran film actor Sam Elliott said that working on this film was the most fulfilling experience of his career.

Cooper says his favorite thing about filmmaking is collaboration. He loves actors and even hired his friends from grad school on ASIB who “don’t work as often as they should.” He literally shared his good fortune with his friends. It is clear that Bradley Cooper is so much more than a pretty face. He is a multi-talented artist who has vision and integrity and A Star is Born is a stunning freshman endeavor. Now that Bradley Cooper has successfully been thrust into the rarefied domain of filmmaker, the only question is: How will he challenge himself next?

Posted by Antonia Russo at 1:26 PM